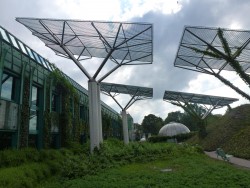 On its second anniversary the UK Green Investment Bank has been congratulated by British Prime Minister David Cameron for contributing more than £5 billion to new green energy infrastructure projects.

The bank is the first of its kind and raises money for the development of the country’s green energy industry. Since it was created two years ago, it has benefited over 200 UK communities as well as raising the £5 billion it directed to the UK’s green energy sector.

Mr Cameron said that the Green Investment Bank “played an instrumental role” in making the UK one of the best places for green investment in the world. He also praised the bank for creating thousands of jobs by starting 37 green infrastructure projects since it’s conception.

Beginning in October 2012, the bank has worked with over 70 co-investors, investing one in every three pounds raised.

The bank’s Chairman, Lord Smith of Kelvin, said that he was especially proud that the bank was investing in every part of the UK, “from the Highlands of Scotland to Northern Ireland, Wales and all parts of England.”

New plans from the bank were announced in June, in which they plan to invest in offshore wind farms around the UK. The move is expected to boost the UK’s wind energy industry significantly.