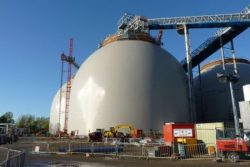 The renewable energy industry in the UK has denied the validity of a new economic analysis, suggesting that it is altering the facts. The report in question claims that using biomass power may cause more carbon pollution than natural gas or burning coal.

These domes are Drax’s biomass storage units. They are able to hold a total 300,000 tonnes of compressed wood pellets between them. This is enough to power Sheffield, Leeds, Liverpool, and Manchester for 12 hours or more.

A recent study released by the Natural Resources Defense Council (NRDC) examines the full cost of the wind and solar energy systems relative to a biomass one in regards to replacing coal to meet UK’s clean energy targets for the 2020-2025 period.

The NRDC concluded that when considering the latest technology costs, the reliability of supply, and carbon costs, wind and solar power are likely to be less expensive than burning trees for biomass. This US-based environmental organisation suggested that many forms of biomass, including those from the forest, produce higher carbon emissions than coal and natural gas.

When comparing burning coal to wood for electricity, the NRDC reports that wood biomass emits 40% more carbon than coal does to produce equivalent amounts of energy. The organization reports that the use of trees as biomass disrupts vital carbon sinks, and impedes ongoing forest carbon sequestration.

Burning biomass at a massive scale to generate electricity increases carbon pollution and is extremely harmful to the environment, according to previously conducted scientific studies, a senior advocate with NRDC said. The carbon emissions risks associated with this type of biomass are too large to ignore, and we see now that the economics of using this biomass in the UK does not make sense.

As the UK strives to decarbonise its power sector, the choice between using wood biomass or cleaner alternatives such as wind and solar is clear in this report. Wind and solar are the lower-cost solution for a coal-free UK, Sasha Stashwick with NRDC concluded.

This report has been discredited, however, by the Renewable Energy Association (REA). In 2013 the REA founded the Wood Heat Association to support the modern wood heat and biomass generation.

Yet again, misleading reports are fundamentally distorting the facts. It is quite shameful that this misunderstanding of how the biomass industry works continues to be perpetuated, the head of policy and external affairs at REA said.

Unlike the REA and other, wider industries, the NRDC did not try to obtain any reports into the carbon savings that biomass can achieve. Tree biomass production is typically from low-value wood. This includes harvest and sawmill residues, tree tops, thinnings, limbs and any misshapen or diseased trees not suitable for other use, REA’s James Court said.

These are sourced from actively managed timber producing forests in the UK, EU, and US. Furthermore, it is worth noting that forest cover is higher now in the US and UK than at any point over the past 60 years. This result is due to better forest management from across the wood product industry.

Evidence shows that the demand for wood products keeps forest-land forested. This call to disregard the unused and rotting wood in favor of burning fossil fuels does not add up. It is also worth mentioning that the carbon savings delivered by UK’s biomass power generators are independently audited. This includes a full life-cycle analysis.

The rules in place insist on significant savings relative to fossil fuels here in the UK, and Drax is achieving carbon savings of over 80% in one of the most difficult areas to decarbonise. The UK’s carbon savings picture becomes even clearer for the wood heating industry, when you compare its average of 87.47% greenhouse gas emissions savings to the EU fossil heat average.

If biomass is done badly, there will be poor results, as with any industry. However, the UK has one of the highest standards for sustainability and accountability. Its biomass has a key part to play in decarbonising the UK’s heat and power sectors in a reliable, low-carbon and cost-effective way, Mr. Court concluded.

The conversion to biomass

Playing an increasingly significant role in Britain’s energy mix, biomass generation levels have tripled from 6.6 TWh in 2009 to around 22.4 TWh in 2015. This is about 9% of the total national generation. The Government hopes that by increasing the biomass boilers in homes and businesses, the UK will be able to meet an EU target of getting at least 15% of the nation’s energy from renewable sources by 2020.

The increase in biomass power has been predominantly due to the conversions of existing coal plants. Now responsible for 38% of total generations from biomass in the UK, Drax Power has converted three of its coal plants to burn biomass since 2013.

For the record, this is not the first time that biomass power in the UK has been heavily scrutinised. A Government study conducted in 2015 found that biomass boilers in the non-domestic sector were around 10-20% less efficient than expected.