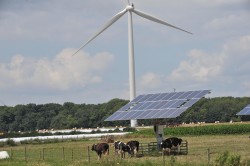 E.ON, Germany’s biggest utility company, has announced that plans to split the firm in two and sell off most of it’s power generating units due to what their CEO has described as ‘dramatically altered global energy markets’.

Germany – on paper one of the most progressive countries in terms of commercial energy – is often viewed as one of the ‘leading lights’ in the European Union thanks to high recycling rates and innovative renewable energy initiatives.

However, E.ON are just one of the commercial energy producers who have found themselves struggling to adapt to a changing sector in the wake of large-scale changes carried out by the German government. In the wake of the Fukushima nuclear disaster two years ago, Germany opted to close down it’s major nuclear power plants, instead focusing on wind and solar.

In the wake of that popular decision, less investment has also been made in oil and gas by the German parliament, again in favour of subsidising renewables. This has, however, created a prolonged period of weak demand, low wholesale prices and a surge in renewable energy sources.

E.ON have announced that, in order to meet the needs of the changing markets, they will be ‘spinning off’ most of it’s power power generation, energy trading and upstream businesses into a new company – whilst the ‘existing’ E.ON company will refocus on renewable activities, regulated distribution networks and tailor-made energy efficiency services.

All of this will happen after E.ON’s 2016 annual general meeting, and in the meantime the German firm will prepare the listing for it’s new company and re-organise it’s 60,000+ staff – with around 20,000 set to join the ‘new’ company.

That said, E.ON revealed they have already begun selling some of it’s existing business; with Macquarie acquiring E.ON’s energy networks in Spain and Portugal for €2.5bn.

E.ON also revealed that they would be holding a conference this week to discuss it’s long-term commercial energy plan, with greater investment in wind and solar having already been confirmed.