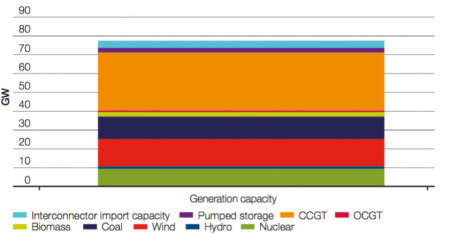 System operator National Grid has confirmed that the risk of winter power blackouts has fallen, with more electricity supplies available than had earlier been anticipated.  The company published its annual Winter Outlook report on 14 October.

It suggested that Britain’s capacity margin – the extent to which the supply of electricity on the system would exceed the expected level of demand from consumers – would stand at 6.6%. This was higher than the 5.5% margin forecast by National Grid earlier in the summer.

The report explained that the improved forecast had been driven by two key factors. Firstly, it is now expected that capacity at the Eggborough coal-fired power station will be available. The plant had been due to close this winter, but having secured a contract to provide system services will now stay open until next March.
Secondly, National Grid has reduced its expectation of the level of electricity that will be exported to Ireland this winter. This is a consequence of an outage on the East-West interconnector, which usually exports power from Britain.

A total of 73.7GW of electricity capacity is expected to be available over the winter, with a de-rated generation capacity – on which National Grid bases its analysis – of 55GW. Meanwhile, demand on the system is expected to peak at 52.7GW.

The system operator noted that, although recent winters had been mild, it was not complacent, adding that the electricity margin was expected to be “tight but manageable this winter”.

National Grid said that it was “confident” that it had the right tools in place to help balance supply and demand on the electricity system, having taken “additional actions” to improve the outlook. For example, it has procured 3.5GW of so-called “contingency balancing reserve” services.

It further expected there to be sufficient gas available to meet demand this winter, while reduced exports to both Ireland and to continental Europe mean that demand will be lower than it was last year.

This analysis will calm nerves about the winter supply picture, but does reinforce the challenges presented by a system in transition away from old fossil fuel plants.