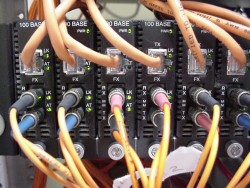 Facebook has opened a new data centre in Altoona, Iowa to deal with the traffic from its more than 1 billion users. However, like their other centres in the United States, the whole thing is run entirely on renewable energy.

Not only are the servers cooled by outside air instead of the traditional air condition systems, but all the power for the entire server farm is generated by a wind turbine in the nearby town of Wellsburg. The Wellsburg wind project supplys 140 megawatts of new energy to the Iowa grid, which is far more than Facebook’s new data centre will ever need to use.

The use of renewable energy and intelligent construction means that it will be no trouble for Facebook to expand its operation in the future by harnessing the same technologies.

According to the operators of the social network, the data centre is also more efficiently designed than your average server farm.

Instead of using the normal tiered system that consists of an extremely powerful (and expensive) core that links to consecutively smaller and smaller tiers, the designers at Altoona decided to go with cheaper core equipment and simpler systems throughout the centre.

This configuration has turned out to be not only more efficient in routing traffic but also a lot less expensive in the long run.

Network engineer at Facebook, Alexey Andreyev, said that although typical data transfer between users and Facebook’s servers is comparatively high, it is dwarfed by the level of data transfer between the company’s internal servers. This means, he says, that the energy efficiency of their data centre systems is vital.