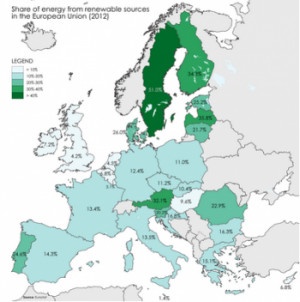 Eurostat, the statistical office of the European Union have released their long-awaited publication on renewable energy consumption in the twenty-eight EU member states for 2012.

Revealed at the end of last month, this new report takes the full calendar year of 2012 into account, producing a fascinating insight into the commercial energy market for Europe, with chance to see not only how other countries on the continent are managing and consuming renewable energy.

The headline news from the report showed that consumption of renewable energy was up in 2012, hitting a record high of 14% of all energy consumption in the EU28.

Over the last eight years, that represents a 5.8% increase from the total in 8.3% in 2004 – the first year from which the data was recorded by Eurostat.

Despite leaning heavy pressure on a number of member states to meet a renewable energy benchmark by 2020, the European Union will see this promising progress as justification for the initiative which has cause no small amount of tension in some nations thanks to the economic crisis.

Sweden, Finland Denmark and Austria stole the show in increasing commercial renewable energy consumption in this period, with Sweden in particular leaping from 38.7% in 2004 to a whopping 51.0% in 2012).

Greece also posted a large increase in spite of notoriously low uptake on EU goals set for ‘green’ initiatives such as recycling.

Analysts suggest initiatives and partnerships to supply solar panel thanks to their climate could be the leading factor behind this increase.

The United Kingdom was left in a sorry state, managing renewables consumption of only 4.2% in 2012.

Whilst this is a massive increase compared to the 2004 total (1.2%) ministers will be hoping that a number of new projects will drive the UK towards meeting its Brussels-supplied goal by 2020.

A peaking of that goal, Bulgaria, Estonia and Sweden already achieve their 2020 targets of renewable energy usage in energy consumption thanks to landmark growth in their renewable energy sectors.