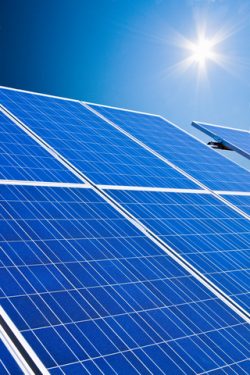 A team at the world-famous Massachusetts Institute of Technology has set an exciting new benchmark for the commercial solar power market by improving the efficiency of a new type of solar-cell, known as a ‘Quantum Dot’ cell.

Whilst solar power has seen the one of the more widely-spread and favorable uptakes out of the renewable energy options available to energy companies, the inherent flaw with traditional photovoltaic cells is the relatively high cost and space required by a cell.

Something that is of a concern given the limited amount of time the sun is bright enough to create significant power during the day.

However, a group of researchers and professors at MIT have set a new record for the most efficient quantum-dot cells. This new style of cell has commercial energy companies excited as a quantum-dot is inherently low in cost, and boasts significant versatility compared to photovoltaic cells thanks to it’s lightweight construction.

As quantum-dot technology is still in it’s infancy, the efficiency of these new-style solar cells is still in question; even this benchmark-setting new model is only capable of converting about 9 percent of the energy of sunlight into electricity.

However, the rise to this level of efficiency within such a short term of the technology being researched has generated a buzz throughout the solar community.

Vladimir Bulović, associate dean for innovation in MIT’s School of Engineering and a member of the project, explains that thin coatings of quantum dots “allow them to do what they do as individuals—to absorb light very well—but also work as a group, to transport charges.”

By contrast, traditional solar cells are incredibly problematic to work with in exceptionally small or large spaces; limitations created by the need for vacuum chambers or concerns over operating times when exposed to air mean there is a very strict limit on how large or small a solar farm can be before it is no longer economically viable.

Chia-Hao Chuang adds, “Every part of the cell, except the electrodes for now, can be deposited at room temperature, in air, out of solution. It’s really unprecedented.”

With this in mind, solar-cells could be places anywhere in a room – from window-sills to wall-mounts that could power a home. Offices would even be able to mount strips of quantum-dot panels on to the inside of windows to be come self-sustaining workplaces – an exciting prospect for commercial operations already competing with rising energy costs.