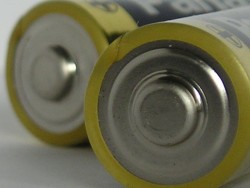 A new wave of ‘nano batteries’ could be leading a cavalry charge to help increase viability for green commercial energy sources, as researchers in the US say they have “ultimate miniaturization of energy storage”.

The team, based at the University of Maryland, have already created a working model of a ‘simple’ nano-battery concept designed to offer up a storage solution for energy created by solar panels, wind turbines and more.

How does it work? The team explained that the concept to science journal Nature as a ‘nanopore’ battery; stamped on to a ceramic cerface, identical holes (the nanopores) use transition metal ruthenium and vanadium oxide to turn each tiny dip in the surface into a a super-miniature battery, with the added elements acting as electrolyte, anode and cathode.

Each tiny battery retains a negligible amount of energy individually; however an array of over a billion of these nanopore batteries can fit on a piece ceramic the size of a postage stamp – making for exciting potential uses thanks to it’s size.

The researchers working on the project hinted that a sheet of their new nano-batteries could be applied almost seamlessly to the underside of a photovoltaic solar panels, allowing the unit to store energy during high yield times of the day, then output that same energy during the night.

Why is it so important to store the power from commercial renewable energy sources?

Networks like the National Grid must retain predictable energy levels to avoid black-outs and brown-outs – something that renewable energy sources aren’t capable of delivering in some countries, like the UK, thanks to temperamental weather.

Which is why the UK is in the process of connecting a lithium-titanite battery capable of retaining two-megawatts of energy for ‘on demand’ usage this month, amongst other experiments such as seeing whether expired batteries from electric vehicles can be given new life as part of an array attached to the National Grid.