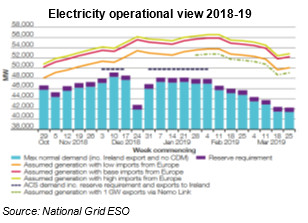 Even in the event of another cold snap this winter, National Grid said it will be able to meet demand. The system operator has predicted that electricity demand will peak at 42.8GW and hit a low point of 20.8GW over the Christmas period, which is lower than the 21.3GW forecast last winter. National Grid also predicted that the forecast of electricity supply margin – the difference between peak demand and peak supply – has increased by 11.7% to 7.1GW

National Grid has forecast that gas demand will be 46.6bn cubic metres, which is lower than last winter’s forecast of 51.6bn and the actual demand of 54.8bn. National Grid said that this lower demand for gas is likely due to its higher price, which goes against the trend for the last two winters of gas being relatively cheap. The network operator predicts that coal will replace some of this more expensive gas supply. It also expects that supplies from all gas sources, including the UK Continental Shelf and from Norway, will be sufficient for demand.

Beast from the East in hindsight

The outlook also explored the imbalance in gas supply and demand last year brought about by the extreme cold resulting from the “Beast from the East”. National Grid was forced to issue a gas deficit warning, which the network operator said successfully encouraged more gas into the market to meet the higher demand. In the report, it claimed that power generation last winter could have been met without coal on the system. The report commented on the issues last year and the plans for the future, saying: “Even under colder conditions than experienced in recent years, we are confident we have the right products and strategies in place to help us balance the gas and electricity networks.”

While supplies will be secure, National Grid also issued a warning that energy imbalance prices could be more volatile than in previous years because of an industry change to balancing calculations known as “PAR1”. This could lead to a beneficial impact of generator units being available, but could also see higher costs past through to energy users.

National Grid appears to be confident that they can handle any surprising increases in demand this winter.