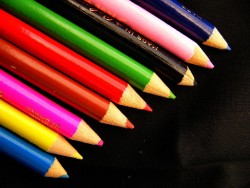 Scientists have discovered a new form of carbon graphite – the material in pencil lead – that had unexpected properties that could cause a revolution in the production of green energy and electric vehicles.

The scientists discovered that graphene allows positively charged hydrogen atoms to pass through it despite the fact that it is impenetrable by all other gases, including hydrogen itself.

The result of this breakthrough is that the efficiency of fuel cells, which make energy from hydrogen gas, could be hugely increased.

The idea has also been raised to extract hydrogen from normal air and burn it as a carbon-free source of energy in fuel cells, producing commercial electricity and water without any harmful by-products.

Professor Sir Andrei Geim of Manchester Univeristy explained the idea by saying that hydrogen that occurs naturally in the air would pass its charged atoms through the graphene layer into a reservoir, where the fuel cell can then burn it and make electricity.

Graphene has consistently wowed scientists since its discovery over 10 years ago. It is the thinnest material known to man, a million times thinner than a human hair, and yet it is 200 times stronger than steel. It is also the best conducting material ever produced.

It was previously thought that a material being permeable to hydrogen protons wasn’t a practical possibility, but a team headed by Sir Andrei, who shares a 2010 Nobel prize for work on graphene, showed that the one-atom thick material could act like a chemical filter. It allows the passage of protons, but blocks all other molecules and atoms.

The study conducted on graphene and a similar one-atom-thick material called boron nitrate showed that they allowed the build up of positive atoms on one side, but prevented any other molecules from crossing over.

In the paper revealing their results, the scientists speculate that there could be numerous applications for this technology, ranging from improving current fuel cells to developing a way to harvest hydrogen from the atmosphere as a for of clean energy.

“Essentially you pump your fuel from the atmosphere and get electricity out of this fuel, in principle. Before this paper, this wouldn’t even be speculation; it would be science fiction,” Sir Andrei said.

There are many potential uses for graphene. As a material it is incredibly tough, about 200 times as strong as steel, and is considered to be the first truly two-dimensional material because it forms sheets that are only one atom thick. It is also an excellent conductor of electricity, and is therefore idea for anything that involves electronics such as bendable mobile phones and wearable technology attached to clothes.

It also has medical applications, and researchers think it could be used to deliver drugs to damaged sites within the body. This could open up new treatments for patients suffering from brain diseases such as Parkinson’s.

There are also suggestions that graphene could be used to purify water in third world countries due to its ability to separate out substances.

Scientists also think that it could be used to create new composite materials and polymers for the construction and transport industries.

It now also looks like graphene will pave the way for a renewable energy revolution as it opens up the possibility of literally generating electricity from thin air.