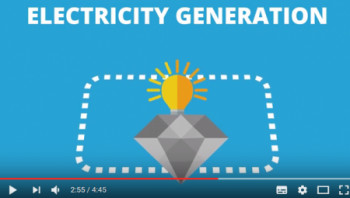 A team of scientists have found a way to use nuclear waste as an energy source, by converting radioactive gas into artificial diamonds. These gems would be able to generate their own electrical current for several centuries and could be used as batteries. This amazing feat is feasible due to the enduring half-life of the radioactive substances utilised.

No moving parts are involved, nor emissions generated or maintenance required. Just direct electricity generated, reported Tom Scott, a geochemist at the University of Bristol.

His team has demonstrated a prototype diamond battery that uses the unstable isotope nickel-63 as its radiation source. The nickel isotope has a half-life of around 100 years, meaning that the prototype device is capable of retaining at least 50% of its power throughout a hundred year time-span.

The scientists have reported that there is an even better source available that they could work with. If this suggestion is followed, it would provide a solution for the UK’s massive stockpiles of nuclear waste.

The Magnox nuclear reactors that were produced in the UK from the 1950s to the 1970s used graphite blocks as a way to sustain the nuclear reactions within. This first generation technique came at a cost, however, due to the graphite blocks becoming radioactive during the process. Now, these blocks generate the unstable carbon-14 isotope consistently.

Magnox reactors were officially retired last year, leaving behind approximately 95,000 tonnes of radioactive graphite blocks that will need to be safely stored and monitored while they continue to emit the carbon isotope. The duration of this process could last several lifetimes, due to carbon-14’s half-life of about 5,730 years.

These radioactive blocks will need to be sheltered for an extremely long time, however, they have the potential to be transformed into a clean energy source if the carbon can be repurposed into a diamond structure.

The carbon isotope was cited as a suggested source material due to the way it emits short-range radiation, meaning it is quickly absorbed by any solid material, explains researcher Neil Fox.

Carbon-14 is dangerous to ingest or touch with your naked skin, however, if it is safely held within a diamond, no short-range radiation can escape. In fact, because diamonds are the hardest substance known to man, there is literally nothing we could use that would offer more protection, Mr. Fox concluded.

The group shared details of their work at an Ideas to Change the World lecture last week, which was held at the University of Bristol. They have not, however, published their research, leaving the viability of carbon-14 batteries currently unknown.

According to the team, the batteries would only be useful for supplying energy to low-power applications, however, it would be long-term.

The average alkaline AA battery weighs about 20 grams, has an energy density storage rating of 700 Joules for each gram, and it will exhaust this energy supply if used continuously for around 24 hours. With 1 gram of C14, our diamond beta-battery will deliver 15 Joules per day and will continue to do so for about 5,730 years, making its total energy storage rating 2.7 TeraJ, Scott deduced.

Energy output at that level could make the diamond batteries useful, especially in situations where it is not feasible to replace or charge conventional batteries. Obvious applications would be in low-power electrical devices that need a long life energy source, such as pacemakers, high-altitude drones, satellites, or even spacecraft, the geochemist elaborated.

Although we’re in the early stages of this discovery, it appears that the research being conducted could provide a useful purpose for our vast quantities of radioactive waste, and batteries with an amazing lifespan.

This is a great example of where the UK could make value from nuclear waste, Scott added.