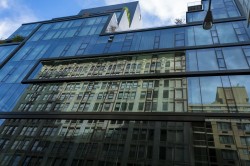 The Latest Advances in Solar Panel Technology: Printable and Spray on.  Novel solar panel technology appears to be a game changer for the renewable energy market.

Researchers are currently developing new film technologies for the solar panel industry. The innovative thin film materials would transform the traditional renewable energy panels into a spray on or printable format. If this research proves viable, it may provide a lighter and less expensive approach to solar panel manufacturing.

Companies, such as Legal & General Capital, Panasonic, Statoil ASA, and Fujifilm, are investing in the new technology. With their support, energy experts are speculating that the first thin film panels will be available before 2027.

According to Dr. Jao Van de Lagemaat, “This field is moving so rapidly that I’m sure in a few years you will start seeing products you can actually hold in your hand”. Van de Lagemaat works for the National Renewable Energy Laboratory in Golden, Colorado.

One of the new technologies currently being developed uses perovskite cells to create a thin film. Due to the solubility of the perovskite cells, they can be sprayed onto a surface in the same manner as paints or inks. Maximising the potential of this novel approach would reduce the cost of solar panel manufacturing.

“You could, in a factory, print these solar cells using a similar process as is used for printing newspapers,” Van de Lagemaat reported before adding “Your solar panels would come as a roll at the end.”

Named after Lev Perovski, a 19th-century Russian mineralogist, perovskite cells are producing promising results. Throughout the last seven years of research, scientists have improved the thin film’s efficiency from approximately 3.8% to over 20%. Although traditional solar panels achieve approximately 24% efficiency in the lab, decades of research have gone into developing the silicon-based cells. To-date the theoretical maximum for energy conversion with solar panel technology is around 33%.

According to Yang Yang, a professor at the University of California, “We have to face reality. To put them on the rooftop and the power plant requires a significant improvement in the material.” Although Yang Yang has proclaimed the new film technology is a “game-changer” in the solar industry, perovskite cells have several drawbacks.

The thin-film technology’s solubility and heat sensitivity collectively reduce the lifespan of the spray on solar approach. Traditional solar panels last for approximately 25 years or more, whereas the perovskite cells currently degrade within a few years. Scientists are trying to improve the life expectancy of the thin film by encapsulating the perovskite cells, however, this may increase the final cost.

Another expensive issue is the disposal of the perovskite cells. The film usually contains small amounts of lead, which can power several square metres of the thin film. Although the total number of lead particles is low, the average amount is substantial enough to encourage scientists to continue their search for non-toxic alternatives.

Oxford PV, a small group of researchers from Oxford University, received two investments of approximately £8.4 million in 2016. The large contributions were made by investors Statoil Energy Ventures and Legal & General Capital.

Oxford PV has also publicised their partnership with a major solar manufacturer. Although the global solar company is currently unnamed, the small research group has stated that they intend to bring a viable thin film product to the solar market by the end of 2018.

Another viable option to traditional solar panel technology is organic photovoltaic (PV) cells. The non-toxic film technology can be printed onto a flexible substrate in the form of a polymer layer. Utilising this approach would make the PV cells very useful for retrofitting.
The versatile solar panel technology can also be coloured and transparent, which means that they can potentially be used for window tinting. Unfortunately, the organic PV cells have stability issues akin to the perovskite cells. In addition, they can only produce an efficiency of 13% in the lab.

Scientists are also developing a quantum dot approach that uses semiconducting particles to collect solar energy. Although the solar technology is far from commercialization, Van de Lagemaat’s team has suggested that it may work well with perovskite cells. The team has reported that this solar combination may make it possible to manufacture a panel that is 30% efficient in the future.

According to Leonie Greene, “There are lots of areas of research and we wait to see which can make it out of the lab into commercialisation”. Greene is the head of external affairs at the UK’s Solar Trade Association.

She went on to say “We shouldn’t forget that commercially available solar, where conversion efficiencies of over 20% are commonly available, are already providing power cheaper than other sources of power in many parts of the world.”