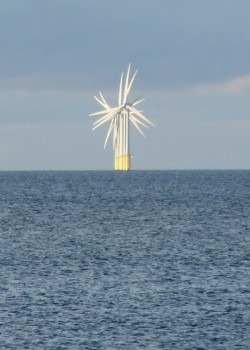 Following on from last month’s news that Wales would be testing a UK-first tidal wave generator as part of a new commercial energy development, Scotland are building what they are already calling the ‘World’s Biggest’ tidal array.

Currently in the midst of an ongoing independence debate, Scotland have been dragging up the UK’s renewable energy percentage with a number of innovative projects, of which the new Pentland Firth installation will be the latest.

Pentland Firth will represent a huge ongoing commitment to commercial energy from tidal sources by Scotland and – for the time being – the UK.

The project will begin with just four new turbines being installed, each with a 1.5-megawatt turbines yield. This initial crop will be supplying power to the National Grid as soon as 2016.

But over the course of the coming decade, a further 264 turbines will be installed on the seafloor off the Scottish coast all with a similar capacity. For a sense of scale, the 156-ton generator we featured last week on Catalyst Commercial will supply only 400kw to the National Grid.

The Welsh installation has a scope of aiming to power 10,000 homes with a further nine generators – early predictions by the Scottish government suggest that if their marine power vision comes to fruition, 750,000 Scottish homes will have their electricity generated by the power of ocean currents.

“This innovative and exciting project puts Scotland and the U.K. on the map as a global leader in marine technology – meaning jobs, better energy security and the potential to export this technology to the world,” U.K. Energy Secretary Ed Davey said in a statement. “The project also shows what can be done when the U.K. and Scottish Governments work together to provide a lasting benefit for the people of Scotland.”

“We’re already leading the world in terms of research and development facilities for the tidal sector, and have more tidal devices being tested in our waters than anywhere else in the world,” Lena Wilson, chief executive of economic agency Scottish Enterprise said. “The plans for the Pentland Firth are further evidence of Scotland’s position as one of the key players in the fast growing renewables sector at a global level.”

With the UK working to an European Union-mandated goal of a certain percentage of power coming from renewables by 2020, Scotland’s vast potential for wave power marks another reason why it would be better to keep them as part of Great Britain.