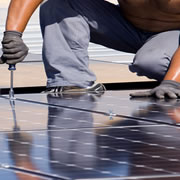 Solar power plants in Germany set a new World Record this past weekend when they produced 22 gigwatts of electricity per hour – a figure that matches 20 nuclear power stations operating at full capacity – according to the head of the Renewable Energy Institute.   Norbert Allnoch, Director of the IWR in Muenster, reported on Monday that the 22 gigawatts of solar power as fed straight into the national grid on Saturday met nearly 50% of the nation’s electricity needs.

This record amount of photovoltaic electricity meant that one of the world’s leading industrial nations was able to meet a third of it’s electricity needs on a traditional ‘work day’, and nearly 50% of the countries power needs on a weekend – when commercial energy demand is at it’s lowest.

The huge leap in power produced for the midday hours on both day came from the huge increase in solar panels installed nationwide since late last year, and a weekend of glorious sunshine to have the operating at optimal capacity.

The news will come as a boon to a renewable commercial energy business in Germany, who have recently revealed a relationship with Greece that will see solar energy produced by photovoltaic panels in the Mediterranean transported trans-continent to provide electricity for German homes and businesses.

Following on from closing 8 plants in the wake of Fukushima, the German government has swiftly had to find new ways to power it’s infrastructure, and renewables have been the cornerstone of this redevelopment.

Despite it’s rapidly-growing energy market, critics in Germany say that growing levels of solar power make the national grid more less stable due to fluctuations in output, as well as being costly to the taxpayer – who pay around €4 billion to develop and subsidise solar power.

Does this huge solar output show that the future could be solar? Or does it only serve to prove how temperamental it is?

What do you think about this, can the UK follow by Germany’s example?

If you would like more information on our range of services or would simply like to find out how we could benefit your business, simply call our energy team today on 0870 710 7560 or request a call back at time to suit.  Or you might want to subscribe for further information on Solar Power Sets World Record from our site, Click Here to subscribe