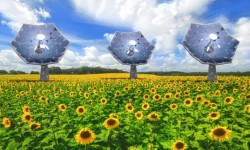 One of the biggest names in computing technology, IBM, have teamed up with Swiss company Airlight Energy to give the tradition solar panel a drastic redesign after revealing an all-new ‘sunflower’ prototype.

In comparison to giant wind turbines and colossal solar steam arrays, the average solar panel is hardly space-consuming or an eye-sore, but the new sunflower solar power prototype from IBM is not only an attractive installation in itself, but it’s unique design allows actually more efficient than existing solar converters.

Revealed this weekend at a conference in Zurich, the sunflower is around 30 feet tall and based around a pillar of concrete. Each of the ‘petal’ discs are crafted from wafer-thin aluminium, but the key to this new design relies on a network of micro-thin tubes which carry water through the device.

You see, the IBM sunflower does more than simply gather sunlight.

Starting with what will interest commercial energy analysts most, IBM claim that the sunflower is capable of convert 80% of the sun’s radiation into electricity – a huge leap in efficiency over a ‘standard’ photovoltaic panel. Not only that, it’s anticipated each unit will cost half as much as a comparable traditional solar panel.

However, the aforementioned coolant is merely water – but the water can be clean, dirty, salt, and so on – it doesn’t matter as long as it can keep the delicate photovoltaic chips at the heart of each device cool.

The operating temperature of each device is a fairly consistent 90C according to the designers, which is enough to desalinate any water that is used in it’s system. Bruno Michel, from the IBM Research laboratories said “That hot water is a game changer: Electricity is obviously vitally useful but so is the heat – for we can use it for desalinating water.”

By adding a filter to the water ‘exhaust’ on each device, these solar panels can produce 12 kilowatts of electricity and 20kW of heat on a sunny day, as well as a considerable amount of clean water.

IBM and Airlight have already set their sights on humanitarian uses for their sunflower, with free green energy now on the cards for remote hospitals or outposts. With that in mind, IBM have promised they will install the first two devices for free by the end of 2016 ahead of a full commercial launch in 2017, and will be asking towns around the world to put their names forward for having a solar sunflower installed in their region.