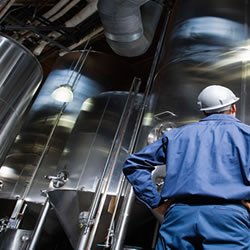 Safer, cleaner, sustainable and many times more effective than any other energy resource on Earth. Meet Thorium, a naturally occurring, slightly radioactive metal, capable of producing immense amount of energy, in a safe, environmentally friendly and very economic manner.

Readers of our blog need no further introduction to Thorium since we talked about it a couple of times before. Back in September 2010 we published “Is Fossil Fuel Dependence Over?” and “Top 5 Energy Resources”.

Since then Thorium research has gained some important ground and countries like the United States and China are already funding programs to deploy small nuclear reactors powered with Thorium.

In scientific terms these so called small nuclear reactors are known as Molten-Salt Reactors or LFTR (liquefied Fluorine Thorium Reactors). These reactors are ten times safer than current nuclear reactors simply because they have a self-controlled safe configuration. In short, if the energy supply to the nuclear power plant is cut down completely a Molten-Salt reactor would shut itself down immediately without the need to circulate water inside the reactor to prevent a meltdown.

One of the biggest advocates of Thorium and leading authority in the field is Kirk Sorensen, a former NASA researcher who now has his own company called Fible.

Kirk has been going around globe advocating on the benefits of Thorium and how it could change the global energy industry for good. Below you will find three videos where he talks about generating energy from Thorium, Molten-Salt Reactors and much more.


GoogleTech Talks: The Thorium Molten-Salt Reactor: Why Didn’t This Happen (and why is now the right time?)


Earlier this month the UK has joined the Thorium bandwagon and formed a new parliamentary group to consider Thorium. The “All-Party Parliamentary Group” or APPG is formed by members of both the House of Commons and House of Lords and will consider the potential of thorium as an energy source.

The APPG will work together with the Weinberg Foundation, a not-for-profit advocacy group for thorium energy. Their job is to generate critical debate on the potential of thorium as a viable new energy source and examine reactor technology and new fuel designs in planning for the adoption of a viable cleaner, safer and abundant global energy solution.

Labour Peer Baroness Worthington, who is the patron of the Weinberg Foundation and Chair of the APPG, comments:

“Whilst public opinion is moving towards the acceptance of nuclear power to combat environmentally damaging fossil-fuelled energy sources, Fukushima clearly demonstrated the dangers of traditional solid-fuel uranium reactor designs. If there is a safer ‘green nuclear’ alternative, which also effectively tackles waste, proliferation and energy security, we have a responsibility to future generations to examine it.”

“As a scientist I am delighted to help establish this platform for evidence based discussion and debate on this most important issue. Nuclear power has always had great potential and the UK was once a world leader in nuclear science research. We intend to explore whether energy from thorium can make a significant contribution to delivering a low carbon economy and help to reinstate the UK’s leadership position.”