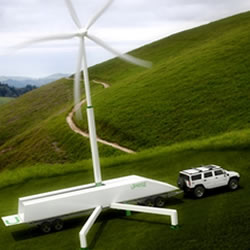 Whilst everyone wants to embrace the idea of renewable, clean commercial energy the reality is that there will be many occasions when it’s simply not realistic.  The humble petrol generator, for example, is a mainstay in just about every venture outside of a settlement; from festivals to theme parks to less-pleasant uses such as military installations and motorway work.  It’s easy to forget that something so commonplace could be so detrimental to the environment.

But a new upstart called Uprise energy think they may have a solution to providing ‘off the grid’ green business energy – a first generation portable turbine.

Whilst ‘portable’ might be overselling it somewhat – it’s the size of a caravan and would need a 40 foot shipping container to transport overseas – the Uprise Portable Power Centre is not only the first of it’s kind, it also houses the most advanced wind turbine in the world.

Possible to set up and provide power to ‘any location on terra firma’ in a matter of hours and is completely operable by a single person, the Uprise Portable Power Centre could well be the future from any business that’s committed to using green commercial electricity.  Thanks to it’s advanced turbine, the Uprise Portable Power Centre has been optimised for low wind-speed environments and produces power for less than domestic utility power suppliers – and is capable of delivering energy into the grid or like a standalone generator.

Each turbine is capable of powering up to 15 homes in 12mph winds, a number which raises to 71 in 20mph gusts. Intelligent by design, the machine will also lay itself down when it senses a storm overhead or if it’s in danger of overloading.

Interestingly, the Portable Power Centre is also capable of harnessing other sources of energy as a back-up, including  air-to-water and biomass-to-hydrogen – in addition to being capable of rotation 360-degrees for optimum wind-capture.   We’d love to see these elegant-looking windmills wherever commercial energy is needed on the move or off the grid; campsites, sports events and show-grounds could soon be powered by one of these.

If we had to pick up on one flaw with the Uprise pitch for the Portable Power Centre, it would have to be:

Q.  Did they really have to use a Hummer H2 (the most fuel hungry vehicle in existence) as the vehicle pulling it around in all the promotional imagery?

For more information about Catalyst’s energy savings please visit or to speak with an adviser for advice on business electricity or gas call 0870 710 7560. Or you might want to subscribe for further information on the Portable Turbine from our site here.