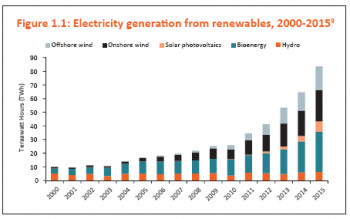 Developing a smarter power grid could result in households saving up to £8bn a year collectively by 2030, according to a new report by the Policy Exchange think tank.

The group published its Power 2.0 report on 7 November. It outlined how the rapid expansion of renewables was creating challenges in terms of managing the electricity system. It explained that renewables generation capacity had grown ten-fold since 2000, reaching 32.5GW.

Meanwhile, conventional generation has been reduced by 23GW since 2010. A further 24GW of coal and nuclear capacity is set to close by 2025.

Currently, the challenges in managing the system are being met through “dirty” forms of generation such as diesel. However, the report said that to successfully accommodate the growth in wind and solar power, the creation of a smarter, more flexible power system was “essential”.

An overhaul of the power system, the report said, would encourage smarter, cleaner technologies such as storage and demand response.
Richard Howard, author of the report, said: “Making the power system smarter will also mean it can provide cheaper and cleaner electricity. The current set of policies is encouraging a growth in dirty diesel generators, exacerbating air pollution in UK cities and towns.”

Among its recommendations, the think tank pressed for a review of the rules of the government’s capacity market scheme, so as to ensure that new technologies such as storage and demand response technologies could access contracts that were long enough to encourage investment. It also said that regulatory changes were needed to stop the double-charging of environmental levies on storage, as this would discourage investment in the technology.

The report effectively highlights the progress that has been made in transitioning towards a greener and smarter system over the past decade. But there are a raft of policy and regulatory barriers that remain to be addressed, and that will almost certainly be a major area of focus for the govenrment over the coming years.