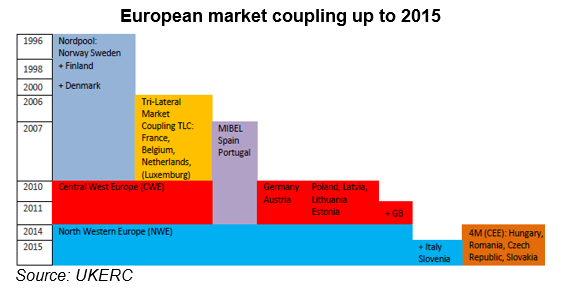 The UK Energy Research Centre (UKERC) published a report on 7 December, in preparation for the now-postponed Commons vote on the Brexit deal, predicting that a hard Brexit could add £270mn a year to the UK electricity bill.

Titled Elecxit: The Cost of Bilaterally Uncoupling British-EU Electricity Trade, the report said that a “hard elecxit” would lead to higher friction in commercial electricity trading between GB and the EU, as well as greater inefficiency.

UKERC detailed the benefits of the EU Single Market alongside the potential issues resulting from GB leaving it. The report used an analysis of GB-France power trading in 2009, before markets were coupled – the graphHard Brexit could increase UK electricity bill shows how 19 countries and 85% of European power consumption were coupled.

UKERC calculated that a less efficient market and the cancellation of plans to build interconnectors would increase generation costs by €560mn (£505mn) or 1.5% annually in both GB and France compared to GB remaining in the Single Electricity Market (a “soft elecxit”), with GB predicted to suffer 60% of this cost – £270mn/ year.

The predicted costs by 2030 of uncoupling were based on the 2009 data – UKERC outlined several limitations of a decoupled system. Dr Joachim Geske, Co-Author of the report, said: “Abandoning the successful system of electricity market coupling is not an inevitable result of Brexit. However, we wish to illustrate the costs of doing so, which are likely to grow significantly over time.”

Decoupling would also result in trading problems, UKERC predicted, due to the time difference in markets which would force traders to commit to cross-border trades based on anticipated prices rather than actual prices. Additionally, this time difference in market deadlines could also lead to new information on demand, supply and prices arriving after bids have already been submitted. The report added that, with markets adding more and more intermittent – not continuously available – renewable capacity, trading errors would likely increase in frequency. UKERC compared this to a coupled system in which system operators take over the role of cross-border trading, taking advantage of standardised information, markets closing at the same time and computer algorithms to automatically move power from lower to higher priced markets.

Additionally, interconnector capability would be severely limited by a hard Brexit because, prior to market coupling, most transmission capacities was sold in long-duration blocks, with the quantity available in each direction limited to the maximum capacity of the relevant interconnector. Additionally, there was often no means of releasing additional capacity.

This report offers clear warnings about the dangers of a hard Brexit to electricity trading with the EU. However, we are still waiting for clarity on the UK’s future relationship with the EU.