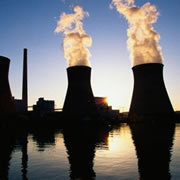 The future of energy in the UK was meant to be in nuclear produced power, with 5 new UK nuclear plants set to be up and running by 2025.   With each of the five UK nuclear plants packing two reactors a piece, new nuclear power plants would provide the cornerstone of the Goverment’s decarbonisation promise, capable of producing 16 gigawatts of low-carbon private and commercial energy to the national grid, the new generation of plants would replace the older ones and provide affordable business electricity to the whole country.

But this vision of a ‘new nuclear’ Britain now seems to be in jeopardy as developers are pulling out of their projects and costs are spiraling out of control.

The plan was originally to pair up the UK’s so-called Big Six energy companies to develop the new plants:

However, the landscape changed following the Fukushima disaster; safety had to be reevaluated and plans had to be relaid to meet new planning recommendations, and that initial delay has seen partners dropping out at an alarming rate.

The good news is that Centrica only have a 20% stake in the project, and EDF remain insistent that they would see no further delay to the plans.

The government, too remain optimistic that the Horizon project left up for sale by the two German companies is attracting interest, “Apart from Latin America, Australasia and Antartica we’ve had interest from every other continent,” Tim Stone, adviser to Energy Secretary Ed Davey

Thought to be in the running are two Chinese state nuclear corporations are backing rival bids by Areva and Westinghouse, which make the leading reactor designs. US-Japanese commercial energy suppliers GE Hitachi and Russian business electricity company Rosatom are also thought to have expressed interest.

Additionally, EDF’s eight currently-operational nuclear plants now look like staying open even longer than once thought. All but one is officially scheduled to close between 2016 and 2023, but industry and Government had been assuming they would probably get “life extensions”of about five years. EDF now seems confident of upping that to seven years, on average, which could see most of them generating beyond 2025.

Whilst we can’t be the only ones conscious of nuclear power plants running on past their ‘use by’ date, the extended lifespan would give the government more time to finish work on the new generation of reactors, or find another alternative.