Vision for a Wind Powered World 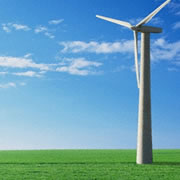 Two new studies published this week agree that the Earth has more than enough wind that could be harnessed to meet it’s energy demands, at least technically.  Published on Sunday and Monday, the two studies from two separate US-based research teams have concluded that, if placed ideally, existing wind-turbine technology could be used to produce trillions of watts of power. If that sounds excessive – that’s because it is; both studies estimated power outputs would create at least ten-times the globe’s current energy consumption.

However, given the idealistic nature of these studies, whilst the amount of energy produced by these perfectly-placed wind farms would be adequate, questions have already asked about how economically viable such an undertaking would be, with critics saying the study sounds good in practise, but has no value in the ‘real world’.

Co-Author of one of the studies, Ken Caldeira, a climate scientist at the Palo Alto, California campus of the Washington-based Carnegie Institution for Science, said “It’s really a question about economics and engineering and not a question of fundamental resource availability,”

The study Caldeira worked on was actually the more optimistic of the two, finding that there is sufficient wind to produce 20 times the amount of currently-used energy – as well as not producing any heat-trapping greenhouse gases like burning coal, oil and natural gas all do.

But the main issue with putting such an undertaking into action is the small platform that’s currently available to build upon – despite their benefits, wind accounts for only a fraction of the energy the world produces at the moment, with new developments often picketed as being eyesores and detrimental to the landscape.

In order to reach wind power’s full potential, more turbines would have to be built. How many more? “If there were 100 new wind turbines for every existing one, that could do the trick”  according to Mark Jacobson, a Stanford University professor who wrote the second study

And whilst Jacobson’s study showed a lower power output from wind power than Caldeira’s study, he’s confident that it’s still more than capable of producing more energy than we could ever need in the future.

Despite his optimism in that sense, Jacobson conceded that the cheap price of natural gas takes a lot of funding away from building more wind farms or designing more efficient turbines. This sentiment was shared by Harvard Professor Henry Lee, who also agreed that the cost of installing wind farms in comparison to other facilities is too high.

Jerry Taylor of the Cato Institute was also quick to dismiss the findings of both studies; as well as saying they were economically irrelevant, the amount of land required and increase in power lines and pylons that it would take to power the world on wind make both sets of findings “utterly irrelevant”.

Could there be a compromise? Or is wind technology in it’s current form simply too cumbersome and too expensive?