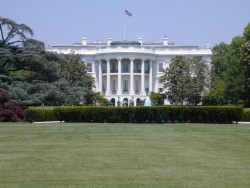 Work will begin on installing solar panels to one of the most famous addresses in the world this week, as the White House will have photovoltaic panels installed on its roof.

The culmination of a three-year old promise by the President, the installation of solar panels at 1600 Pennsylvania Avenue represents a commitment by the Obama administration to green energy.

Confirmed to be starting this week by a White House official to a Washington journalist, the installation comes as part of on-going work at the home of the First Family to make the building more energy efficient.

No word on whether Barack will spend the weekend putting in rolls of loft insulation, though.

As well as making the building more eco-friendly, the work is set to be something of a case study for American solar energy on a commercial level.

Primarily, according to a White House statement, the panels used will be produced and installed by an American company; a much-needed endorsement as heavily-subsidised photovoltaic cells from China are a much cheaper option for many businesses considering a switch to solar.

It will also be an example of how alternative energy solutions can be integrated into older and historic buildings without diminishing their value.

Former US energy secretary said of the installation, “This project reflects President Obama’s strong commitment to U.S. leadership in solar energy and the jobs it will create here at home. Deploying solar energy technologies across the country will help America lead the global economy for years to come.”

However, this isn’t the first time solar panels will have graced the roof of the White House.

In 1979 Jimmy Carter installed 32 solar panels on the roof that provided power to the water heating systems in the building, even warming the White House pool. They only lasted 7 years, as Ronald Regan had them removed in 1986.