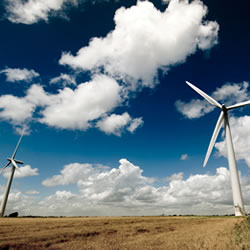 A new report conducted on behalf of the European commission has declared wind as the cheapest source of commercial energy – but only when ‘external’ factors are brought in to consideration.

Revealed earlier this week, the data – written for the European commission by the Ecofys consultancy – revealed that onshore wind is cheaper than coal, gas or nuclear energy when the costs of environmental and societal impact are brought into consideration.

The report took into account the efficiency of the main sources of commercial energy, before adding in other metrics like air quality, human toxicity and climate change.

The conclusion was that onshore wind costs roughly €105 (£83) per MW/h, whilst the cost of gas and goal was calculated to be €164 and €233 per MW/h, respectively when considering the cost of pollution and disposal to the economy as well as subsidies and levies.

EU’s energy commissioner Gunther Oettinger, deemed the report valuable and “a first step” to filling gaps in knowledge about the nature of energy subsidies and more reports are likely in the months ahead.

Speaking to the Guardian newspaper, Wilkes said “Renewables are regularly denigrated for being too expensive and a drain on the taxpayer. Not only does the commission’s report show the alarming cost of coal but it also presents onshore wind as both cheaper and more environmentally-friendly.”

The news will have many second-guessing the Conservative party plans for energy here in the UK. The Tories plan of restricting new onshore windfarms looks to be denying the UK chance to invest in the cheapest form of commercial energy thanks to lower subsidies and tighter planning restrictions