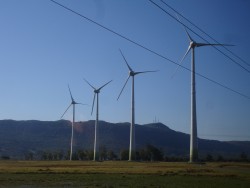 Whilst many articles seem to buy into the myth that renewable energy in the UK is still in it’s infancy, new data following the end of the year has been published, revealing that the UK homes are operating on as much as 25% power from wind.

Renewable UK published a report based on newly-released data from the National Grid, revealing record amounts of wind – and other clean commercial energy sources – were used across Britain over the last twelve months.

Wind power was the headline-maker in the report, revealing  that wind generated enough electricity to supply the needs of more than 6.7 million UK households last year; a 15% increase on the amount generated in 2013 (up from 24.5 terawatt hours to 28.1TWh in 2014) – equating to the annual demand of over 25% of homes in the country.

In a bigger picture sense, and factoring in commercial energy customers such as businesses and facilities, wind farms and smaller sites connected to the grid accounted for 9.3% of the UK’s total electricity – another improvement over 2013’s 7.8%.

December proved a particularly fruitful month thanks to optimal conditions and high usage across the country, with a record 14% monthly high of all electricity coming from wind at the end of the year, as well as contributing to a new quarterly high of 12% of electricity from wind in the last 3 months of 2014.

RenewableUK’s Deputy Chief Executive Maf Smith said: “It’s great to start 2015 with some good news about the massive quantities of clean electricity we’re now generating from wind, with new records being set month after month, quarter after quarter, and year on year, as we increase our capacity to harness one of Britain’s best natural resources.

“We’re now into a General Election year so we know that the political temperature is set to carry on rising over the next few months.

The cost of energy has become an important political issue, so now would be a good time for voters, prospective parliamentary candidates and MPs to take account of the fact that onshore wind is the cheapest form of renewable energy we have at our fingertips.

So if we’re serious about cutting bills, and securing an indigenous supply of clean power, all parties need to support it in the months ahead”.

Indeed, renewable energy and the commercial electricity and gas markets in general are set to be a political hot topic in the run-up to May, with Labour promising to freeze energy prices, and the Conservatives juggling a number of controversial energy issues such as new nuclear, solar subsidies and fracking.