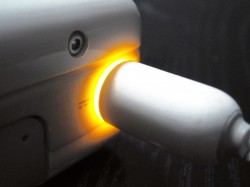 Easily charge your phone while travelling, without the need of a charger.

One of the most common concerns a traveller faces while en route to a destination is how to charge their phones. Chargifi seeks to alleviate the anxiety associated with draining your mobile phone’s battery.

Designated locations, such as Pret A Manger, install Chargifi transmitters under tabletops. Each transmitter provides customers with a way to charge their mobile device by simply placing it onto the table’s surface.

Dan Bladen, CEO and Co-Owner of Chargifi, has suggested that “Wireless charging is going to be the new norm.  In the same way you or I would choose a coffee shop because it has Wi-Fi, we think soon you’ll choose them based on wireless charging too.”

According to an independent study conducted by Allied Market Research, Bladen’s statements may not be too far from the truth. Allied’s study states that the wireless charging industry is currently estimated to reach $37.2 billion by 2022.

Bladen was inspired to start Chargifi while travelling abroad with his wife, Jessica, in 2011. According to the couple, “Power was our biggest problem,” throughout their travels across India and South America. “We realised that we made very strategic decisions about coffee shops and restaurants we went into because of the availability of power so we could connect with family and friends back home.”

When the couple returned home to the UK, Bladen sought a solution to this power problem. Bladen, Head of Technology at St. Paul’s Church at the time, crafted an inexpensive wireless charging pad. Afterward, he contacted his friend Charlie Cannell, the Head of Digital at Inflexion.

“We went back to his office after lunch and said let’s call this Chargifi.”

Within the next 48-hours Chargifi acquired a new logo and website domains. Since then, the company has raised $3.4 million from various investors, such as Intel Capital, R/GA Ventures, and Techstars.

Big tech companies are also getting involved in the wireless charging movement. Samsung, for example, equipped their latest phones with built-in wireless charging capabilities. This feature makes it possible for users to hover their Galaxy S7 or S8 over a hotspot and boost the device’s battery life.

Other noteworthy companies following this growing trend include Microsoft, Dell, Blackberry, and Google. Surprisingly, Apple is not publicly pursuing wireless charging. According to Bladen, however, “all rumours point towards Apple having a wireless charging device later this year”.

Local locations, such as The Clubhouse in St. James’ Square, Imperial College London, Pret A Manger in The Strand and Victoria currently have Chargifi hotspots ready for consumer use. Other noteworthy locations include various sports stadiums in Spain and the US, as well as the Grand Hyatt hotel in New York.

According to a study by OnePoll, more than half of Brits experience anxiety due to a battery charging dilemma at least once a week. OnePoll’s research, commissioned by Chargifi, revealed that about a quarter of Brits endure the dilemma at least three times or more in the average work week.

“We’re hopefully releasing people from a huge amount of battery anxiety” Bladen promised. The study also states that 64 percent of women and 51 percent of men are willing to spend an additional £15 on coffee or sandwiches for the convenience of wireless charging.

An analysis of 10,000 Chargifi sessions revealed that the busiest day of the week for wireless charging is on Thursday at 3 PM.  This data comes at no surprise considering “That’s the time people are going into the red zone and might be going out that night after work” Bladen stated before adding “We’re here to get you home…We’re here to make sure you can use Apple Pay to get off the tube.”

Bladen also commented on the plethora of Chargifi locations around London, stating that “What we have in technology is leaps and bounds ahead of anywhere else in Europe.”

He also speculated that Chargifi will expand beyond mobile devices in the future. “As we’ve grown and looked more at the industry, it’s been quite obvious where wireless charging solves other problems as well…Your Uber in the future will go and charge at a particular time, a particular place, with no driver, using a Chargifi-enabled transmitter”.

Other plans for Chargifi are currently in talks as well. “Commuters will come in on the train, wirelessly charge their laptop and phone on the journey, and get into the office and the desk has got it. You won’t even think about power – it’ll always be on tap.”

Bladen went on to state that as we evolve toward creating our smart cities of the future, even delivery drones may benefit from being able to charge themselves wirelessly.