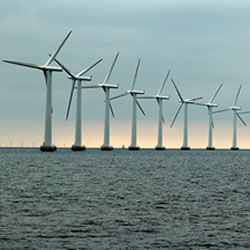 The renewable energy sector in the UK received a shot in the arm late last week as the world’s largest offshore wind farm was opened on July 4th.

None other than Prime Minister David Cameron was on hand to cut the ribbon at the London Array, a flagship renewable energy development  that the government hopes will both underline it’s support for the growing wind power sector in the UK and show investors such large-scale projects can be a success in Britain.

Owned and operated by DONG Energy, Masdar and E.On, the 630MW-capacity wind farm has been up and running in the Thames estuary since April. However, it wasn’t officially opened until the Prime Minister and Climate Change Minister Greg Barker christened the facility this week.

“This is a great day for Britain and a big win for renewable energy,” said Cameron, during the opening ceremony. “London Array shows you can build large scale renewable energy projects right here in Britain. This is because when it comes to clean energy, the UK has one of the clearest investment climates globally.”

Since taking office in 2010, Cameron’s stance on renewables has been hard to keep up with. Calls for investment and schemes like the Green Deal have shown signs of promise, but slashing subsidies as part of austerity measures and relying on ‘new nuclear’ to provide stop-gap commercial energy until the country’s capacity from renewable sources increases have show a level of reluctance to put too much faith in ‘green’ initiatives.

It was widely applauded, then, that the Prime Minister himself was on hand to open the London Array and talk up the UK’s renewable commercial energy potential, given the wind farm is the only major green power scheme to be inaugurated by Cameron since taking office.

Once such advocate was Maria McCaffery, RenewableUK chief executive.

“Such a strong signal from the very top of our political establishment will help to put an end to the siren calls from the naysayers who’ve failed to appreciate the scale of the opportunity Britain has here,” said McCaffery in a statement. “We need to maintain our pole position in offshore wind energy to reap the full economic and environmental benefits.”

Currently, the UK boasts more than 3GW of offshore wind capacity, with plans to introduce a further 15GW by the end of the decade..