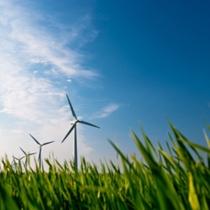 Despite 2012 proving to be a rich year for The Energy Bill, the development of new technologies and potentially game-changing projects in the UK, it seems investors worldwide weren’t quite as encouraged by news from the commercial energy sector as we were, as worldwide investment in green energy projects fell 11% last year.  Reports from the BNEF (Bloomberg New Energy Finance) confirmed that $268.7bn was invested in 2012. Whilst an impressive figure on it’s own, this makes 2012 the second-most successful year on record for the clean energy sector – behind 2011.

The data, compiled by the BNEF, also revealed a year of worldwide contrasts from many of the globe’s biggest commercial energy markets; the US suffered a huge slowdown in investment thanks to political uncertainty in a year which featured a tightly-fought presidential election, causing it to lose it’s status as the world’s biggest investor in clean energy.

Picking up that baton was China, which has undergone a rapid expansion in 2012, seeing it’s investment total rise to $67.7bn – a leap of 20% over 2011’s figure. Staying in the Far East, Japan were another country that made a huge increase in renewable commercial energy investments following the launch of it’s post Fukushima initiatives.

The continued rumble of the European credit crisis was still being felt by some of the continent’s biggest countries; Spain and Italy both saw their investment in decarbonisation slashed by more than half, with Spain in particular tightening it’s belt and cutting 68% of it’s investment.

“We warned at the start of last year that investment in 2012 was likely to fall below 2011 levels, but rumors of the death of clean energy investment have been greatly exaggerated,” said BNEF chief executive Michael Liebreich. “Indeed, the most striking aspect of these figures is that the decline was not bigger – given the fierce headwinds the clean energy sector faced in 2012 as a result of policy uncertainty, the ongoing European fiscal crisis, and continuing sharp falls in technology costs. Solar PV module prices, for instance, fell another 24 per cent over the course of last year.”

Some bright news did come in the form of the diversification of commercial energy projects around the world. Whilst there might be less of it happening, there is green growth in more places, with Australia, South Africa, Morocco, the Ukraine, Mexico, Kenya, Brazil, Ethiopia, Chile and South Korea among the countries seeing at least one project of more than $250m financed during 2012.

Subscribe for further information on Clean Energy Investment from our site here.