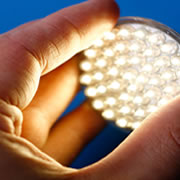 Innovation is the byword in the lighting industry over the last decade or so. Hardly any time has passed since every build seemed to use a filament, before making way to eco-friendly options and more-recently, LEDs.  Most recently, the discussion has shifted to OLEDs. Now, fans of the smartphone and high-end television market know that in those markets, OLED screens are a definite upgrade from a ‘standard’ LED system. But can the same be said of their use in commercial lighting?The conversation has been generated by Korean electronics giant LG. LG took to a recent trade show to demonstrate it’s new OLED lamps; the first time OLEDs will have been used solely for lighting and are taking something of a gamble on them being a success.

However, the bump in price that will accompany this upgrade is especially hard for companies and consumers to take for two reasons; first of all, LEDs are yet to plateau in efficiency, with new advancements being made regularly to improve brightness and efficiency.

The second reason is redundancy; not only have many commercial organisations only recently upgraded to LED Lighting on the promise the system technology would last decades longer than old fluorescents, but major cities across the world only recently started installing streetlights in the last two years.

A sub-set of luxury lighting technologies have also hit the shelves of late, allowing users to control their lighting from a smart-phone, changing colours of the light and dimming it with the slide of a finger.

However, these extravagant value-adds will offer little to organisations who want a value-for-money solution that will prove more cost-effective in the long-run.

Experts in the field say that LG could be making a rare mis-step in this instance, and that businesses may actually be better off in the long and short term sticking with LED technology for the time being.

Talking to Catalyst many people in the commercial lighting industry agree that the investment to Lumen (the standard measure for light) is nowhere near viable, and won’t be for some time.

“LEDs are like microprocessors, and they have a pseudo Moore’s law – which is to say, they’re getting significantly better every year…and it isn’t slowing down anytime soon.” said one expert. “Switching over to an organic technology will yield inconsistent wavelengths, and extremely expensive production; unless they get the power consumption under control I don’t see it replacing LEDs altogether.”