Final energy consumption in Q220 down 30% year on yearBEIS released its Energy Trends and Energy Prices publications covering data on energy production and consumption and prices for domestic and industrial consumers for the April to June period of 2020.

Total primary energy consumption was shown to have fallen by 24% compared to the same quarter of 2019, or 19% when taking weather differences into account. Final energy consumption was 30% lower than the same period in 2019, or 22% lower on a temperature adjusted basis (see Figure 1). A significant drop in all fuels across all sectors was observed. 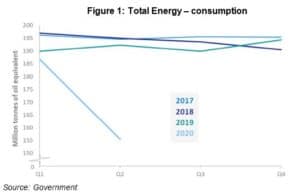 Renewables’ share of commercial electricity generation was up on last year’s levels, increasing to 44.6% compared to 35.6% in 2019. This was partly due to increased renewable electricity capacity, which increased 5.4% on last year to 48.5GW, with 80% of this from offshore wind.

Energy prices also saw some large changes in Q220. The Office of National Statistics price indices for the quarter showed a decrease of 18% in the real term price of gas for both domestic and industrial users compared to the same quarter in 2019.

Ofgem data also indicated a decrease in domestic customers switching suppliers compared to the second quarter of 2019 and were 16.0% lower for electricity and 8.3% lower for gas.