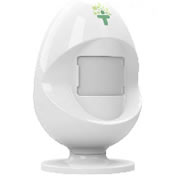 It’s the frustration every father has felt, right up to the point of parody – you walk into a room to find the lamp on, the TV blaring and the Playstation on pause – but the kids have all got bored and gone to different rooms.  Well, one Kildrum dad decided that enough is enough, and invented a solution that is taking the energy world by storm.

Brian O’Reilly says that the Energy EGG was  “built out of frustration really.  My daughters know about being ecological and environmentally friendly from things they’ve learned at school, such as turning off taps and turning off lights, but they knew nothing about switching off plugs and TVs and the like.  “So I felt that I needed something that would turn things off automatically and was affordable as well.”  Consisting of two parts, the Energy EGG is designed to wirelessly control numerous devices plugged into a single power outlet.

One part of the system plugs into the wall, where a chain of plugs can then be plugged into it.

The actual EGG is a highly-sensitive sensor, which can be placed in high-traffic areas of a home or business, and after a user-set period inactivity the EGG will tell the wall plug to shut everything down.

The Energy EGG is designed to save the average household around £70 per year, but used as a business electricity management system – the energy EGG could well save some companies thousands in commercial energy costs.

A single EGG sensor can signal multiple power sockets, meaning that an entire office of computers, printers and lamps could shut down simultaneously 15 minutes after everyone’s left for the night, ensuring maximum efficiency.

The EGG isn’t without a few other nifty tricks, either – the unit will emit a loud beep before shutting down, giving you time to wildly flail your arms to get it to recognise you if you’re in the middle of an all-nighter.

At a cost of £40, the Energy EGG might seem a bit expensive for your average household, but for a company looking to save on their commercial energy costs – the price hardly makes it seem like you’re putting all your eggs in one basket.   So keep an eye out for the Energy Egg comming to a shop near you soon.