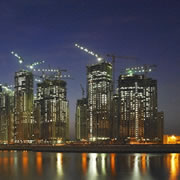 Reports this morning indicate that Abu Dhabi could be set to invest as much as £1bn into UK’s alternative energy industry as part of their ongoing energy strategy. Early morning reports from the Financial Times indicated that Madsar, a renewable energy company owned by state in Abu Dhabi is set to work amongst the UK government’s Green Investment Bank and invest into green energy initiatives in development across Britain.

Sheikh Khalifa bin Zayed al-Nahyan, president of the United Arab Emirates, is currently visiting London and is looking to tie up the likely deal this week – something that the Coalition will find especially timing given the announcement that Britain has barely avoided a triple-dip recession.

Chancellor George Osbourn has been under public scrutiny after failing to cause tangible growth in the sector, despite the introduction of The Energy Bill, and will likely point to the Gulf State’s investment as evidence that the UK’s investment opportunities are attracting high-profile suitors.

However, monitors of the commercial energy sector will welcome any investment with a sense of relief, after loan-guarantees from the Treasury failed to attract fresh money into the market, with fears over construction risks cited as a reason for trepidation.