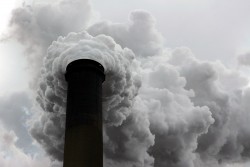 It has been discovered that subsidies being granted on household energy bills have caused a boom in polluting “diesel farms” across the UK so the grid can meet periods of high electricity demand.

One programme for the National Grid has almost a quarter of Britain’s back-up power provided by tiny fossil fuel power stations – some of which have been built on what was previously farmland by opportunistic entrepreneurs.

When there is a surge in demand for power, for example during large sporting events such as the World Cup or Wimbledon, the mini-power stations are brought online by grid managers.

In the next few weeks the grid is going to offer, through auction, a new lot of subsidies for diesel farms in order to ensure that the lights never go out across the country.

However, the Department of Energy and Climate Change (Decc), the grid, and the many companies involved with the process have been reluctant to divulge any information about this shadowy new industry.

Many experts admit that they have not heard of this new trend, but say that it flies in the face of the Decc’s attempts to reduce CO2 levels. Burning diesel also produces large amounts of particulates and nitrogen dioxide, which are known to be responsible for 29,000 premature deaths each year.

Technology company KiWi Power, which specialises in reducing energy demand, said the grid’s new industry plans should be restricted to low carbon solutions only and that the construction of diesel farms should be halted.

Yoav Zingher, co-founder of KiWi, said the money could be better spent on innovation instead of polluting diesel farms.

The grid has admitted that 22% of its short-term operating reserve (Stor) programme is met by diesel farms, but was not prepared to release information about the companies involved in the production.

National Grid, which is privately owned and tasked with balancing energy supply and demand, argued that it cannot discriminate against fossil fuels.

“Stor contracts [for shot-term extra power] are awarded based on capability and price, and we cannot discriminate against fuel types offered,” a spokesman said.

That diesel generators of under 50 MW could bid for subsidised contracts under the transitional arrangement was confirmed by the Decc.

However, a spokesman declined to explain why the use one of the most carbon heavy fossil fuels was being encouraged, blaming the general election campaign.

Peak demand response has become a serious issue in the last few months, as old coal and nuclear power stations have been decommissioned, but not enough replacement gas-fired stations constructed.

Outgoing chairman of the House of Commons, Tim Yeo, called the boom in diesel farm construction “ridiculous” and campaigned for more to be done to reduce demand.

The shadow energy minister, Tom Greatrex, said it had been a risk from the start that carbon policies would create a surge in tiny, “dirty diesel generators” that are too small to be affected by current legislation. “Sure enough, 40MW of small diesel generators have now secured 15-year subsidies,” he said.

Alasdair Cameron, an energy campaigner at Friends of the Earth, said that it is obvious renewables will be the main source of energy in the future. “It’s vital that we design a clean back-up system that works with them,” he said.

Getting hold of information about diesel farms is difficult. Many companies will refuse to give out information, with one operator withholding the location of their farms for “security reasons”.

Of the few firms that have actually given up information, Green Frog Power has confirmed that they have taken advantage of contracts through Stor, under which they can be paid to generate diesel power even when it is not being used.

Green Frog was originally founded as a green energy company, collecting cooking oil and turning it into biofuels. However, they have since switched to using traditional fossil fuels to make their power.

With money from InfraRed Capital Partners, which used to be a part of HSBC bank, the company has constructed 214MW of diesel generation, including 52-generator plants in south Wales, Swansea, Hull and Plymouth.

Green Frog director Mark Jones confirmed that the carbon intensive diesel equipment was expensive to operate, but insisted that it would only be used to respond to moments of peak demand.

“The plants are run for short periods, quite infrequently; less than 50 hours a year on average. They are designed to start and get to full output very fast and can do so in 45 seconds if needs be. Gas plants cannot respond as fast for technical reasons.”

The company’s website says it is building these “modular fast-start” power stations throughout the UK. However, Jones said Green Frog has now stopped building diesel farms and has moved onto more environmentally friendly gas-fired plants. “We hope that … legislation does serve to close down the diesel plant that our competitors seem hell bent on building,” he added.

Abbey Power Solutions has constructed 50MW of diesel generation plants in Sheffield and Barnsley in Yorkshire, as well as in Spalding in Lincolnshire. They confirmed that their plants are involved with Stor, but refused to divulge any information about their operations.