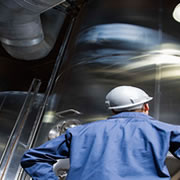 Researchers at the University of Michigan have developed a method of creating crude oil from algae that takes as little as only a minute.  So-called ‘biocrude’ has become a hot property as the global energy economy looks for a way of weaning itself from oil-based products like petrol onto more renewable forms of energy. But findings from the Engineering Department at the University of Michigan, presented at the American Institute of Chemical Engineers Annual Meeting in Pittsburgh, believe they have found a way to ‘pressure cook’  microorganisms to create eco-friendly biocrude in less than a minute.

“We’re trying to mimic the process in nature that forms crude oil with marine organisms,” said Phil Savage, an Arthur F. Thurnau professor and a professor of chemical engineering at the University of Michigan.

Whilst crude oil takes millions of years to produce naturally, the one-minute biocrude is created by capping 1.5mm of wet algae in a steel pipe, plunging it into sand heated to 1,100 Farenheit. The small volume ensures that the algae is heated consistently, hitting around 55-degrees before being pulled back out.

Using small volumes of the micro-alga genus Nannochloropsis makes the process more cost effective, according to Savage. Something that biocrude backers will be thrilled to hear: Current commercial gas makers of algae-based fuel price their biocrude at over $20 per gallon, preventing it from being a viable alternative.

The industry standard biocrude extraction method uses dried algae, but that extra step is one of the factors that drives the price up – and it’s something that researchers are already racing to remedy;

“Companies know that that approach is not economical, so they are looking at approaches for using wet algae, as are we,” Savage said.

“One of the advantages of the wet method is that it doesn’t just extract the existing fat from the algae—it also breaks down proteins and carbohydrates.  The minute method did this so successfully that the oil contained about 90 percent of the energy in the original algae”.

Savage and his team are already working hard at improving the efficiency of refining the biocrude into petroleum, as well as effective ways to farm the algae.

One logistical issue is that an area the size of New Mexico would provide enough biocrude to match the US’s current petroleum consumption. However, specialist farms needn’t be set up; merely farmed from brackish ponds and lakes instead.