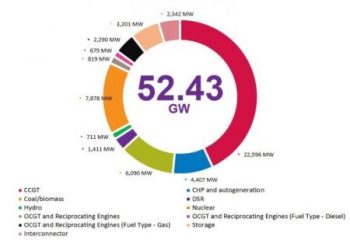 The government has secured over 52GW of electricity supplies for 2020-21, following the conclusion of its latest capacity market auction.

The auctions, introduced by the coalition government in the previous parliament, seek to ensure that the UK’s power supplies remain secure as it transitions away from old fossil fuel plants and towards cleaner sources of generation. The process sees providers of power capacity – be they electricity generators or demand response providers – offering to ensure that they are available to the system in return for payments that supplement the revenues that they can make in the electricity market. The main auctions are held four years in advance of the winter in which the capacity will be delivered; so, auctions in 2014 and 2015 have already awarded capacity contracts for 2018-19 and 2019-20 respectively.

The latest auction continued the trend set by its predecessors in awarding contracts – the cost of which is ultimately recovered through consumers’ electricity bills – at a lower price than had been expected. Successful bidders into the auction will receive £22.50/kW for the duration of their contracts at an overall cost to consumers of £1.2bn. This was higher than the cost of the first two auctions.

But, despite the government’s intention of using the auction to incentivise the development of new power stations, almost 90% of the successful capacity came from existing plants. This included 24GW of gas plants, and nearly 8GW of nuclear power. Moreover, almost 6GW of coal was awarded contracts, despite the fact that the government is currently taking forward plans to phase these power stations off the system by the middle of the next decade.

Ahead of the auction, the government and energy regulator Ofgem undertook a series of actions intended to support the prospects for new gas projects being awarded contracts. New gas is regarded by the government as a critical component of the UK’s low-carbon transition. However, only two new gas power stations were ultimately successful bidders: Centrica’s 333MW plant at Kings’ Lynn and Intergen’s 298MW project at Spalding. The most successful source of new capacity in the auction was instead small, “embedded generation” projects, which are connected to the local distribution networks. Over 2.5GW of this capacity was successful, while over 500MW of battery storage projects won contracts.

Business and energy secretary Greg Clark said that homes and businesses had been provided with “certainty, at a low cost to bill payers, years in advance”, of an electricity supply that they can rely on all year round. He said: “Technological innovation, as part of our low-carbon future, will create jobs and opportunities across the UK. We are rebuilding an archaic energy system, bringing forward brand new gas power and innovative low-carbon capacity like battery storage to upgrade our energy mix.”

Clark added: “This is about more than just keeping the lights on. A modern, reliable, and flexible electricity system powers the economy and Britain’s future success.”

The auctions continue to deliver security of supply at a lower cost than many expected, but they are also bringing forward a mix of technologies not fully aligned with the government’s vision for the power sector.