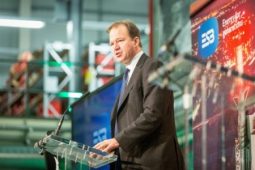 Catalyst was in attendance at the official opening of the new 880MW combined cycle gas turbine (CCGT) power station in Carrington near Greater Manchester this week.

As Energy Minister Jesse Norman officially marked the opening of the new £710 million development at Carrington, which has the capacity to provide power to more than one million homes and businesses and forms a vital part of the overall supply mixture in the UK.

The UK operator is Carrington Power, which is a subsidiary of Ireland’s Electricity Supply Board (ESB) and with the new gas fired power station using the latest CCGT technology it will also be able to provide quick back-up power to the grid when needed for intermittent generation such as wind and solar.

With ESB claiming that it is one of the most efficient thermal plants in the UK, expected to generate four times more electricity than the coal plant formerly located on the site.

Energy Minister Jesse Norman said: “New power stations like this complement low carbon wind and solar renewable energy by providing reliable electricity all year round, whatever the weather or time of day. And this investment has created skilled jobs for the area as well.”

With the opening of Carrington, this now brings ESB’s portfolio to 4,827MW of thermal and renewable generation assets in operation across both Ireland and Great Britain. In addition to Carrington, ESB operates a 350MW gas generation plant in Corby and operates three onshore wind farms at Fullabrook (66MW), Mynydd y Betws (37.5MW) and West Durham (24MW).

ESB is also currently constructing a £190million, 40MW waste wood biomass plant at Tilbury in Essex in partnership with the Green Investment Bank which will commence operations later this year.

However Ireland’s Electricity Supply Board (ESB) have put on hold plans to build a new 1500MW combined cycle gas turbine (CCGT) power station at the site of the former Oxiris Chemical works in Knottingley, Yorkshire.

The construction of ESB’s, new power plant will be delayed indefinitely, due to a lack of financial funding. The building expenses of ESB’s gas-fired power plant will exceed €1 billion Euro. ESB has announced that construction will not proceed until they are able to secure a contract with the British government.

Planning permission for a 1,500-megawatt power plant in Yorkshire was previously granted to ESB, however, Pat Fenlon, ESB’s finance Director, has stated that the end of 2017 is the earliest possible time that a decision will be made on how to proceed with the Yorkshire power plant.

The next annual capacity auction for the UK will be at the end of this year. Each auction is held to ensure that the UK has adequate energy to meet the electricity demands of the system during peak times.

National Grid conducted the 2016 auction on behalf of the UK government. The goal of last year’s auction was to secure an energy source for the 2020 winter season.

Fenlon stated that although ESB participated in the 2016 auction, the company was not able to secure a contract with the government at a profitable price. ESB’s analysts cited the auction’s price for a kilowatt hour of energy as approximately half of what they anticipated.

At the conclusion of the auction, Fenlon remarked that the price was “lower than we would [be] happy with to invest in [a] new plant”.

According to Fenlon, “There’s a fair bit to go before anything will happen in terms of the development of that site.” He went on to say that ESB is “unlikely to proceed with it unless we secure a long-term capacity contract at a satisfactory price.”

Despite the financial setback, Fenlon has announced that ESB’s summer debut in the UK will not be canceled. There are over 50 energy companies in the UK, however, six energy suppliers dominate the market.

During ESB’s announcement of their full-year results for 2016, Fenlon stated:

“It’s early days, but it’s progressing well…In the long run, as part of our strategy, we see it as important to develop a generating, trading and supply business of scale across Ireland and the UK…Both markets are interconnected and two of our biggest competitors in Ireland operate in the UK…To have a strong indigenous energy company, we have to look at that market in its totality. We see the retail business in the long run as being an important part of the business to balance out risk…It’s not essential for us to grow really quickly. We’re developing that business organically and it will develop at a reasonable pace over the next number of years.”